“And anyone who welcomes a little child like this on my behalf is welcoming me.”

On the night of our first full day in Addis, we finally made our way to our precious sleeping quarters. Jule and I shared a room with Ethan. We failed to drape mosquito nets over our bed that first night, but we did not make that mistake again.

We slept and slept and it felt wonderful. When Sunday morning came, we were fresh and rested. We attended church in Addis with about 600 people in the congregation at Beza International Church. (You can read about their ministry here http://www.bezainternational.org). The service was in English, and the music was in English, and Amharic and Congolese. We worshipped and sang and took in the feeling of joy and happiness just by being there. During the afternoon we traveled through more of Addis and did little sight-seeing. We visited the church

Monday morning brought us to our first work day. Our agenda was to work at Kidane Mehret Orphanage doing repairs and painting. Ethan had an opportunity to sit down and talk with Sister Lutgard Camilleri about the orphanage history. Originally from Malta, of the Franciscan Sisters of the Heart of Jesus, she came to Ethiopia 44 years ago when she was assigned to the orphanage. The orphanage was previous started and run by a Sister who worked in the home until she reached her 90’s. When she passed away, Sister Lutgarda moved in.

As a matter of love and care for the children of Ethiopia, no child that comes to the home is ever turned away. The government provides very little assistance to the home. At any point in time, the orphanage may be home to any where from 80-150 children. Many of the children are from the streets, or are illegitimate. Having an illegitimate child carries a negative social stigma in Ethiopia and is very much frowned upon in families and by society, causing mothers to seek abortion or prompting them to leave their children in an orphanage to live. Many children have lost their parents to HIV. If the children did not live at the orphanage, they would be turned back out on the streets, or they have been aborted by mothers in illegitimate cases. For the children to be adopted, they must have government certification which is especially difficult these days due to such an increase in human trafficking cases. The Ethiopian government just last week, for example, passed a law prohibiting the export of Ethiopian citizens outside of the country for employment, due to increasing human trafficking and abuse to people leaving Ethiopia with promises of employment and wealth.

Sister Lutgard tells the story of one child who was literally thrown over the fence as an infant. At the time, the groundskeeper thought kids were playing around by the fence and as he approached, he saw in fact that an infant had been left by the gate. The baby’s cry grabbed the attention of the groundskeeper, and the baby was taken in to the orphanage.

While we were working in the orphanage (painting and cleaning areas in the home and volunteer quarters), we spent a great deal of time with the children. Their joy and happiness was contagious. The young children and infants were well cared for and loved. I was particularly taken by how much attention each child had from the nurses there. No child was left crying in a crib. Every baby was held and cuddled and loved. I expected that I would see sad faces, or tears from the children while we were there. In fact, the children were joyous and happy, well cared for and loved. They were clingy, for sure. They craved attention from all of us, and from the staff working there. But they were clearly happy and content with each other and with Sister Lutgard and with the staff. They were grateful and well behaved. They played fair with each other. There was no argument or disagreement among the ranks of the younger children who were often looked after by the older children. Jule observed the kids playing soccer. In choosing teams, there was a clear system, and although some of the kids may have been unhappy with their team assignment, they did not argue the process. They followed the rules and remained content with the game. They had a blast. 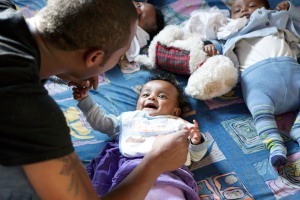 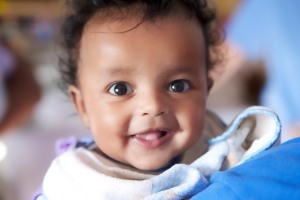 Ethan and I were able to watch some of the meal preparation. Everything is prepared daily with fresh fruits and vegetables. The kids helped with preparation. The food smelled SO GOOD and looked delicious.

The children have gardens and animals. They attend mass every morning and have school every day.

Perhaps one of the greatest moments in our week was getting to be a part of a reunion with two of the kids as they joined their new parents. Last year, two families in our church began the process to adopt children from Kidane. One family adopted a brother and sister and another family is adopting 3 sisters. The family adopting the brother and sister received word prior to our trip that all proceedings have been completed and they were notified that they could make arrangements to pick up their children. Lisa and Mike Bagwell therefore travelled to Ethiopia during the same week we were there, and picked up their new son and daughter, Habtamu (11) and Helen (16). When we pulled up to the orphanage on the morning of their “gotcha day,” we arrived right behind the Bagwells and witnessed Helen and Habtamu running into the arms of their new family. We all were moved to tears. The joy on their faces was indescribable. Helen later told us that all night on the night before, she and her brother lie awake with excitement. Habtamu kept tugging his sister’s arm and asking, “do you think they will really come? What if they aren’t here? What if they changed their mind?” Little did they know that there was NOTHING that would keep his new family from coming for him that day. It was planned long ago and orchestrated perfectly through the will of God to happen at that moment. After living at Kidane for 5 years, Helen and Habtamu were with their new parents and sister, and they would be traveling to their new home in the United States – on our same flight home as it would turn out. What a miracle.

5 thoughts on “Our experience deepened…”