In the afternoon of day 6, Ethan started to feel bad, and I thought he may have just been exhausted. He slept most of the afternoon, but that evening had a fever of 102. The next morning he was just too sick to go out for Bible distribution on the very first day of OJ (Operation Joshua in case you missed prior posts…). His fever climber over 103 and stayed there most of the day despite Tylenol and Motrin. He was quite weak and there was no doubt he was dehydrated and unable to participate in the distribution.We were very disappointed not only that he was sick but that would miss the first day. I enlisted the help of prayer partners and I prayed all morning until his fever finally broke around 3pm. He was then able to get up and eat and rejoin the day’s events later for dinner and evening worship. His turnaround was quick, praise God.

That morning, all I could think was how unrelenting the enemy is when he tries to keep us away from doing God’s work. But as Job said in the Old Testament, are we to praise God in the good times and not in times of trouble?

Turns out, the OJ team was able to get a substitute passenger in our place and she was able to serve in translation for our car. This would never have happened if we had been there. They certainly ended up needing a translator when they arrived to the first village which was a Roma Gypsy village. The team encountered a Roma Gypsy who was able to tell her story to the translator and her story was amazing.

She in fact already had a New Testament Bible that she had obtained from OJ  three years ago. She pulled it out to show the group and indeed it was well worn. She explained that she had been reading the Bible every single day since she got it and she now has a personal relationship with Jesus and has been saved. Her only complaint was that she wanted also an Old Testament that she could also read and understand, and so OJ is making that happen for her! Her family gathered around her and welcomed the team, offering stories of love and praise for Operation Joshua. The team observed the peace in that home and could only attribute it to the love for God they held there.

The team had a negative encounter the same day (day 8) when a resident from the village approached their car while they were on their lunch break. The police in fact had also approached the car and wanted to see papers / passports for the group. At the time the resident approached on the moped it was apparent he had a grievance as he was yelling and shouting to the team, calling them heretics and throwing the Bible into the car. The translator in the car (you know, the one who was there only because Ethan and I were unable to go) was able to diffuse the situation somewhat with the police which was a comfort to the team. The police, astonishingly, did nothing, however,  while the angry resident ofrom the moped tried to get into the car to attempt harm to the team. Ultimately, he gave up and left but needless to say, it left the team feeling shaken and nervous, especially when the police so clearly were not advocating for them. The gravity of what can happen shook everyone up. But God is good and they remained under His protection without further incident in the day.

Later that night when Ethan and I rejoined the rest of the group, we heard many stories about experiences different teams had that day. Probably one of the most remarkable stories was when one team encountered a young man who was very interested in seeing the “gift” being handed out in his village. As they talked with the young man, he told them that his father was the village priest! The team then asked to meet the priest as a gesture of coming in peace and not in conflict and the young man took the team to the priest. The priest was also quite interested in the Bible being given out, and after looking through it, he said “I have never seen something like this and it is very good. Where can we get more for the people in our church. They need to see this.”

This interaction with the priest was truly miraculous as the local Greek Orthodox Church has claimed Evangelicals as heretics for the last 30+ years and has never been open to looking at the New Testament in modern Greek language. God was moving in that village on that day!

On the morning of day 9, Ethan felt much better and we were able to go out for distribution to the city of Larisa. The population of the city is around 150,000. The entire OJ team – all 40+ cars with 4-5 people in each car distributed Bibles to the entire city of Larisa on day 9: Over 40,000 Bibles in total with 1 per household. Some cars distributed hundreds of Bibles over more spread out residences, while others distributed greater than 1000-1500 Bibles in more condensed housing areas.


Some if not most people that we encountered received the Bible and really did not say much about it. I saw one young woman, probably in her late 20’s, grab the Bible out of her doorway and angrily thrust it into the trash. Some of the elderly people we encountered just flat out would not accept it and did not want it on their doorstep. We were called heretics and we were yelled at. But the most disturbing interaction was with the local priest of Larisa.

“For I am not ashamed of the gospel, for it is the power of God for salvation to everyone who believes, to the Jew first and also to the Greek. For in it the righteousness of God is revealed from faith for faith, as it is written, “The righteous shall live by faith.””

🔹When we were on the return down a street we had finished, we could hear yelling and we could see someone in the distance running back and forth from house to house, throwing something. As we got closer, we realized that most of the people had walked out onto their balconies to see what the stir was about. The priest, dressed fully in his black robe and black hat, had collected all of the Bibles from the doorways where we had left them, and was throwing them into the trash and some into the back of his car. At this point, one of our team members approached him calmly and asked if we could speak in peace with him. This effort was futile. We showed him the Bible and attempted to explain that this Bible is the very same New Testament used in the Orthodox church, only that it is in modern Greek language rather than ancient text. We pointed to the seal of the Orthodox Church printed on the first page of the text, but at that point, he grabbed the Bible from our hands, and continued yelling, “heresy! Heresy! Heresy!” The residents watched quietly. No one else was making a sound. His anger alone echoed off the buildings. There was no one backing up his frustration. We surrendered and walked away, wanting no conflict at all. He threatened to call the police, but thankfully his anger did not come to that.

What I cannot understand is how a priest who knows scripture, teaches it, reads it and understands the Ancient Greek text of the Orthodox Church, can behave in such an angry and verbally abusive way to anyone holding the word of God in their hands. We were not bringing anything to anyone that was not already in the Greek Orthodox Church. It is only a translation – a modern day Greek translation – to be understood by the reader who can only speak in that language. Why does that threaten the church here? I cannot understand this at all.

We had today to ponder our efforts so far. Perhaps it is the very act of censoring the New Testament from the people of Greece that will stir the movement and reformation here. In other words, the church’s fierce efforts to keep scripture away from these people may only serve to drive it into their hands even faster.

With each New Testament I hang on a door or gate, I pray that the words of Jesus will reach that family and that they will know the truth. They will not be isolated from the Word of God because of angry priests who feel threated in some way. We prayed for that priest. We pray for Larisa. We pray for this Greece. I pray for my own country. So many don’t read the scripture that is rreadily available for them. We are so fortunate to have the scripture without having to fight for it or risk losing our lives for it. Maybe if we were not so comfortable with our freedom we would stop taking it for granted.

The days to come will be different after that experience with the priest. We may encounter more anger, rage, emotional outbursts from angry priests, but as I see it, if we are doing this for the sake of the Gospel then the enemy is sure to make it hard on us. So I guess it just confirms that we are on the right track! 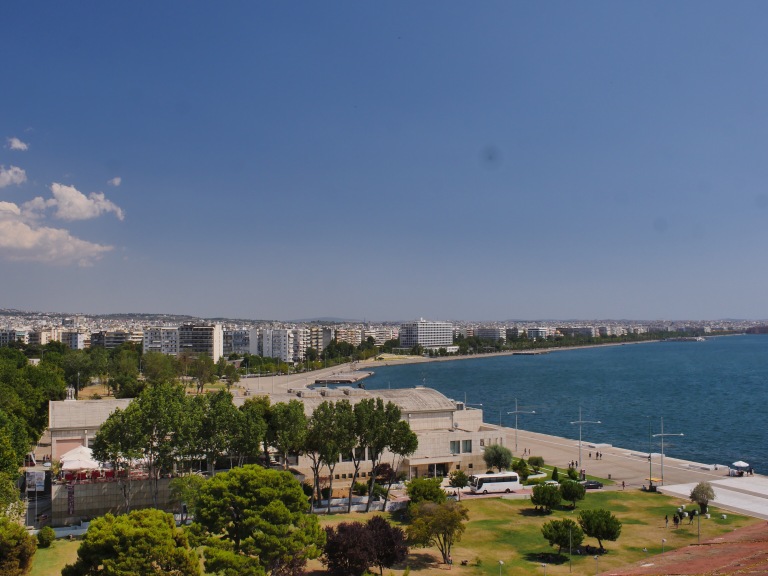